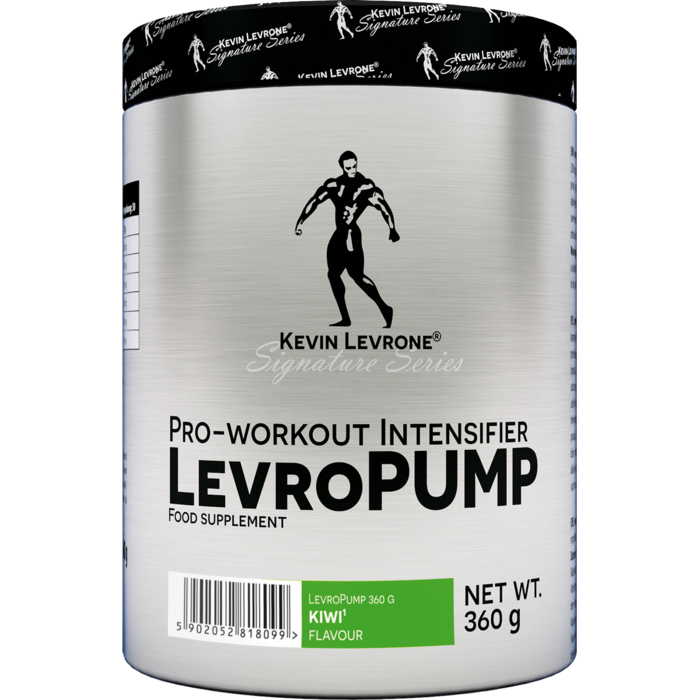 LEVRONE LEVRO PUMP is a multi-ingredient composition in the form of easily dissolvable powder, which has been prepared with a view to enthusiasts of intensive and exhausting workouts. The product combines optimally selected concentrations of six active ingredients that are commonly used in sports supplementation. The supplement has no added sugar, and its refreshing and incredibly oaty flavour will help quench your thirst in even the most critical moment. The pre-training supplement is characterised by its easy solubility, which makes it possible to prepare it quickly. The formula is recommended primarily to fans of bodybuilding and strength and endurance sports.

What are the advantages of LEVRONE LEVRO PUMP ingredients?

•  The combination of L-arginine and L-citrulline can affect blood pressure, which contributes to the "muscle pump" effect, promoting the transport of nutrients and oxygen to the muscles[1,2]

•  Beta-alanine has been shown to increase carnosine levels, muscle endurance and lean mass[5,6,7]

•  L-tyrosine may have valuable applications in endurance training[8]

Warnings: Do not use if you are allergic to any of the product compounds. Do not exceed the recommended daily dose. Food supplements should not be used as a substitute for a varied and balanced diet. Do not use if pregnant or nursing. Keep out of reach of young children. Do not consume LevroPump with alcohol. A varied and balanced diet and a healthy lifestyle are recommended.

Store in a dry place, at room temperature (15-25°C). Protect against light. Do not freeze.

The measure included in the packet serves to facilitate portioning, but it does not guarantee precise dosing. It is advisable to use scales in order to measure out the exact amount.

If you take medications, you should consult your doctor before you consume the product.

Orders are processed within 24 hours (business days: Monday - Friday). Orders placed on Saturday and Sunday begin on Monday. Each completed order is completed by sending an e-mail to the Buyer with information containing the number of the consignment note and confirmation of dispatch. Shipments are delivered by GLS courier. The customer on the website https://gls-group.eu/PL/pl/sledzenie-paczek has the possibility to check the status of the shipment thanks to the number of the consignment note.

The cost of delivery depends on the value of the order.

In the case of damage to the transport packaging that may have an impact on the damage to the goods or the defects of the ordered goods, the customer should refuse to accept the package. The courier is obliged to complete the damage document in such a situation. The Customer signs the damage document submitted by the Courier, which is the basis for immediate re-sending of the non-defective (undamaged) good or immediate return of the paid amount. At the same time, the Customer should notify the Customer Service Office of this damage - by phone: 58 770 22 96 or by e-mail: reklamacje@levrosupplements.com